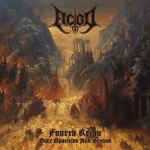 Are ACOD one of these rough and poisonous two-man-deconstruction troops or is it a project, which is becoming enlargend with musicians by the two protagonists Fred and Jerome? Very difficult to say – but it doesn’t really matter anyway. Because what these two freaks from the cultural melting-pot Marseille in the south of France have released here is musically intresting enough and aiming to crash borders. A wild and incalculable trip through different genres, always on the edge between insanity, extremity and genius. Never stop! No standstill! Permanently something happens here! Hollow croaked Black Metal with frenzy beats and icy-frozen riffings meets atmosphere and builds up to a Death Metal thunderstorm (‘Nekya Catharsis’ or the mighty ‘Sulfur Wind Ritual’). Breaks, easily played bass-tunes and short moments of silence, immediate broken by whispered words in the French language. Together with roughly shredded moments of simply organic Punk or Thrash Metal rhythms they build up massive soundwalls. The listener needs to stop before these walls, just to experience that they will be erased a moment later brick by brick (‘The Prophecy Of Agony’ or the hypnotic, almost doomy ‘Artes Obscurae’). Unpredictability, the courage to be silent within the raging storm and the permanent change between eruption and taking a new breath out of the emptiness – that makes this record become a real intensive issue! A bit like a spider which weaves its prey into its web, not really willing to let it loose again. Even if the last note has already faded (‘Through The Astral Door’ and the title-track)! Great songwriting with awful inscenated arcs of tension in the songs. Artistically an extremely multi-layered album. Check here: www.facebook.com/acodband, www.facebook.com/ladloproductions