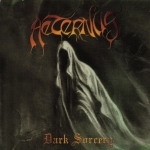 It is interesting to note that in the days before every Black Metal band started either playing Death Metal or adopting it’s mannerisms, AETERNUS were sounding a damn sight more deathly than perhaps some give them credit for in light of their current leaning, sans corpse paint they are now more firmly entrenched in the Death Metal camp then ever before. Yet this their first MCD still reeks of a downtuned BOLT THROWER fixation long before the likes of BEHEMOTH or GEHENNA were contemplating the full MORBID ANGEL. The one thing you will notice is the Epic folk tinged elements that have largely been forsaken these days that came to fruition on their second and in my opinion most superior recording “And So The Night Became” are very much in evidence here. And at 20 minutes AETERNUS haven’t the time to labor their point as often can do but instead hit you hard and fast and thankfully leave you satisfied. “Dark Sorcery” replete here with extra track (‘In The Darkest Circles Of Time’ – Frank) is a rather excellent if inauspicious beginning for this oft overlooked and under rated band.