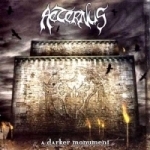 After the Norwegian dark Death Metallers AETERNUS were dropped by their long-term label Hammerheart Records the band members must have been extremely frustrated, because on their newest effort one senses more aggression than on all previous releases. The sinister, thundering opener ‘Sword Of The Earth’, the blasting beginnings of the fantastic ‘Litany Of Ra’ and ‘Soulslayer’ prove that. AETERNUS have left behind the atmospheric folk influences that were existent on their first three albums and turned into a deadlier direction. Unfortunately that is also the only weakness of “A Darker Monument”, because I miss the epic and mighty feeling of “And So The Night Became…” on the last two offerings. This does not make AETERNUS a worse band, but they have certainly lost a small amount of fascination, at least for me. Still the new material contains great heavy and darkened Death Metal and songs like the aforementioned or the closing ‘Sons Of War’ are undoubtedly excellent and deserve to be called “the northern version of BOLT THROWER”. The production is great as well and if you can do without the folk elements and the Black Metal feeling of the early AETERNUS releases you should be pretty happy with “A Darker Monument”. For more information check out www.nocturnalart.com or the band’s web site www.aeternus.ch.