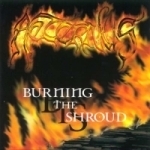 Next to tribute albums compilations seem to be THE big thing at the moment! But in many cases they are really worth checking out, especially if they not only concentrate on wellknown material. “Burning The Shroud” from Norway’s AETERNUS is such a goodie. Unfortunately I discovered the brilliance of these guys kinda late, but as soon as I was hooked, I started to worship all their releases immediately. The band’s combination of a raw Norwegian Black Metal type songwriting, produced in a really heavy way and with those really dark and deep grunting Death Metal vocals on top just works out perfectly fine! This album features four exclusive live tracks in really good sound quality (recorded in Bergen, in February 2000), three studio songs that have previously only been available on the limited tour edition of “… And So The Night Became…” (two of them were also available on a limited 7″ picture disc), two unreleased songs from the “Shadows Of Old” session and the title track ‘Burning The Shroud’, a brand-new tune that will already give you an idea how the next (real) AETERNUS album will sound like. All in all this is great stuff, essential for all AETERNUS fans out there, even more if you get to know the fact that this (approximate) fifty minutes long output is on sale for a special price!! That’s what I call value for money!