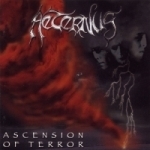 AETURNUS is a band that I somehow missed out in their beginning and just got to know a while ago through their last full-length “Shadows Of Old” album. The compilation “Burning The Shroud” really made my interest in this band rise as their combination of very raw Death Metal and furious Black Metal outbursts sounds remarkably fresh to my ears. Recorded in the famous Grieghallen studio, “Ascension Of Terror” comes up with a really strong, heavy and powerful sound and production which really suits their music very well. Overall, I have the impression that the Death Metal influences have become bigger this time (just take a listen to the very technical-sounding title-track which could just have been on an IMMOLATION album as well…) which is a good thing in my book. The strongest points of this band are to my opinion, the very tight drumming (the drum-style reminds me very much on the famous MAYHEM album “De Mysteriis…”), the hateful vocals and the very nice mid-tempo riffs (which sound surprisingly melodic sometimes). Somehow, AETURNUS is still a rather overlooked and to my opinion very underrated band, which is a pity as their material is really strong, way above the average and worth a listen. If you like bands like GOD DETHRONED and the latest outputs of a band like IMMORTAL, I think you will appreciate AETURNUS as well. Check it out for yourselves and also have a listen to “Shadows Of Old” if you have the chance, you won’t regret it.