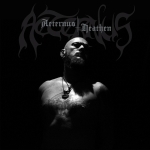 “Heathen” is the seventh full length album by the Norwegian band AETERNUS, just released by Dark Essence Records. They are a pretty known name in the Norwegian Black Metal underground, since they were born in 1993. Ares (vocals and guitars) is the only original member still involved in this project, that defines its style as Dark Metal. To me this is a very vague definition that doesn’t give the idea of how this band sounds. Maybe something like blackened Death Metal with epic and folkish elements would fit better to their style, that can be defined as a mixture of HADES, ULVER, ENSLAVED and BEHEMOTH. Basically they alternate slow and melodic parts of typical Norwegian Black Metal (arpeggios, mid tempos, epic melodies and a bunch of doomy riffs) with some aggressive and solid Death Metal structures. When they play Death Metal, the overall sound is very reminiscent of BEHEMOTH’s second phase and their countrymen HATE. Yes, there are some fast, brutal and blasting accelerations here and there, all with a freezing and grim vibe pretty similar to MOLESTED, whereas the Black Metal parts follow the traditional Norwegian sound from the ‘90s, especially the most polished and melodic bands from those years. In conclusion this is an honest album with all the pros and cons of an hybrid between two genres: atmosphere on one side, brutality on the other. For more info: www.facebook.com/aeternusofficial, www.darkessencerecords.no