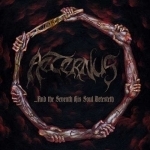 I have always had an ambivalent relationship with AETERNUS. I have really enjoyed some of the music from Ares’ hands, and on the other hand found some of it very boring. Quite funny how a band can create soulful and catching tunes, and other pieces that seem to lack energy and emotion. Music is of course always in the eye of the beholder, but I’ve still wondered about the effect AETERNUS have had on me, during the years. The band has been in a hiatus since 2007, when they released "HeXaeon", an album that didn’t do much for me. "… And The Seventh His Soul Detesteth" ventures along the same realms. Heavy and dark Death Metal with hints of the early days of melodic and cold Black Metal, a combination that on paper should kick ass. And the music on the new record does kick ass, here and there, and it does become a bit stalling at other times. There are a lot of great ideas, and sometimes they shine through and make you rock, and at other times they seem to keep themselves locked up in a small room, not progressing or moving at all, which makes a quite dull expression. Quite a shame as the band has the musicianship to rip it. I don’t know if it is, that AETERNUS wants too much in a too small space, and that makes the sound and output entangled, or what it is. The album grows with each listen and do have kick ass moments, there are some good dark and energetic riffing, some blazing melodies and captivating atmospheres. The overall atmosphere is darker than dark, and has an evil touch to it, though there are moments that kill the momentum for me, like the classical guitar in ‘Saligia’ to mention one. More focus and straight forwardness, with the subtle eerie and hellish atmospheric side in the background, would have made the album more captive, I think. Still a quite good offering from the Norwegians, though I still think AETERNUS is to make their complete album, and I am for one, looking forward to when they do! www.facebook.com/aeternusofficial, www.darkessencerecords.no