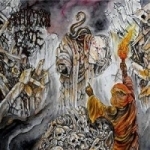 Death Metal from France hasn’t had the best reputation the last years. Currently there are some hyper technical (and fuckin’ boring) “Death Metal” acts on the market and in the past France offered good names as MASSACRA, LOUDBLAST or AGRESSOR. That’s mostly all about it (hey Thomas, and what about MUTILATED / ABYSSALS??? – Frank) (Damn, I’m unworthy!! – Thomas). Honestly spoken, I always had the impression that the French Death Metal scene is lame. But this band here – AFFLICTION GATE – proved me wrong and made me recognize that France has at least one great band in the pipe. AFFLICTION GATE already surprised me with their promo demo last year. Now with their first CD they don’t surprise, they impress me. From time to time you can recognize that several bands record their first CD too early, when talking about AFFLICTION GATE I can say that the time is just perfect. The band plays in the intersection of bands as ASPHYX, BOLT THROWER, MORGOTH and BENEDICTION and they don’t even care if you compare them to those bands (and they do well about that). I can say that they already showed a huge potential embedding those influences on their promo demo and succeeded here on this recording. As the 3 demo songs are included in new recorded versions on this CD, too, you can easily compare and recognize how the sound matured. It’s old school Death Metal these 3 French musicians (plus a couple of session musicians) offer on this CD, old school but not outdated and in my opinion one of the best Death Metal releases of 2009. You don’t hear killer songs as ‘The Worst Is Yet To Come’, ‘Knights Of Scorn’ (both available as appetizers on their myspace-page) or ‘Cattle Burner’ on every corner. Perhaps we at Voices From The Darkside were a little bit too early when mentioning our, the staffs’, Top Ten of 2009 already in beginning of December as this CD surely deserves to be mentioned in at least the top of my list. Besides the awesome music I have to mention the fantastic vocals of their vocalist Herostratos. You don’t hear such a great, clear and especially incisive voice that often. The band took the opportunity to commit ACHERON’s very own Vincent Crowley to do some additional vocals on the opening track, though I have to say that this, besides the name-dropping, was not necessary simply because the vocals itself are already outstanding enough to convince. Well, to keep a long story short: AFFLICTION GATE’s debut album is a killer record and from my point of view one of the best debut albums of a band since a long time and one of the best old school Death Metal albums of the ending year 2009. Now let’s hope that the next killer is going to be BOMBS OF HADES upcoming debut album. Check out www.myspace.com/afflictiongate and www.metal-inquisition.de.