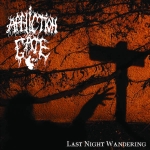 AFFLICTION GATE from France haven’t crossed my path until their farewell release "Last Night Wandering". The guys started already back in 2006 and released one full-length album and four EPs including this one. The opening track ‘Tanglemoor‘ offers solid old school Death Metal somewhere between BOLT THROWER and the doomy Dutch league like BEYOND BELIEF. The track lives from its memorable lead melody and the groovy rhythm guitars and the well-dozed grunts which sound pretty much like Karl Willets, which is not bad at all. The second track ‘Wollstonecraft‘ is an uptempo track, more in the vein of BOLT THROWER and less melodic but pretty groovy and a small neckbreaker. ‘Last Night Wandering‘ starts slowly before it’s also increasing the speed. A solid groovy Death Metal track, a bit less memorable, but still enjoyable due to its power and groove and its solid guitar solo. This last chapter gets closed with their very last track ‘Sunset’. This instrumental epilogue is again a slow Death Metal track with a doomy note and a doomed and melancholic lead melody, which is pretty memorable again and shows the quality their whole material has. I really would have liked to hear more of that but the band was finally buried by its members. So the best condolences we could offer them is checking their very last material out via one of the following sources: www.facebook.com/afflictiongate, www.forgottenwisdomprod.com