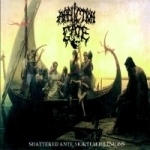 You could call this old school, but I think timeless is a better description. The majestic heaviness of BOLT THROWER quickly emerges as major influence on the first track, ‘Memories Of Battlefield’. A great opener, ‘Memories…’ starts with an atmospheric, rather melancholy intro then smashes on with greater speed. Then ‘Aftermath Curse’ hits the ground running, once again bringing to my mind images of BOLT THROWER’s classic 1991 album, “Warmaster”. I could be mishearing something but the song titles and songs themselves strongly suggest the influence is there. There is a DEATH-like solo in ‘Aftermath Curse’ but that’s it – the rest, as I said, screams “Warmaster”. The weaker track for me is ‘Raven…Never Again’. Somehow, even though the formula for this song is the same as the others, I find it lacking overall but nevertheless the song is home to some killer riffs. Finally, a dark, melodious piano track called ‘Omega’ concludes the EP. I think there’s every reason in the world to check this band out. They know what they play and they know how to play it. Great stuff! www.myspace.com/afflictiongate, www.metal-inquisition.de