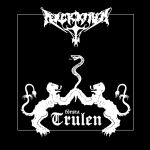 It is said that ARCKANUM’s only member and founder Shamatee recorded the proper debut demo "Trulen" twice. For some reason he decided to go with the second version whilst the original recording was forgotten… until now. So, this is actually a restored form of the very first original demo, with basically the same songs, a quite bit different arrangements here and there. For those living in the lost woods, ARCKANUM’s music style has remained the same since its birth: mystical, trollish Black Metal, which is not strange to melody, but has kept a raw sound in the recordings. This demo follows the same path since this ex-member of GROTESQUE decided to create a Black Metal style not that far away from early BATHORY with some subtle touches of mystic Death Metal and lyrics sung / shouted / screamed in ancient languages to add more of a magick touch to it. This was intended to be something more than a rehearsal done on a 4 channel mixer, but to be honest it is just above a rehearsal quality sound, so take that in count. The more well known release of this demo, is in essence quite similar, just maybe some song structures and riffs might have been slightly changed, and the sound is also a bit different, yet still raw and amateurish, still haunting and Troll-invoking. As a matter of fact I was never too much into the earlier material due to the weak guitar sound, which might give that grim feeling to it, but takes away all the heaviness. Something the band seems to realize that they still can have a grim guitar sound and sound heavy, since they started doing that with the "Antikosmos" album, and at least for me, they perfected them with the «ÞÞÞÞÞÞÞÞÞÞÞ» album. As a piece of history and for collectors of all the band releases, this is something to consider getting. Take in count that the band is also buried by now. And let’s not forget the great masterpiece they created with the album "Helvítismyrkr", one of my all time Black Metal faves. https://arckanum.bandcamp.com, www.folter666.de