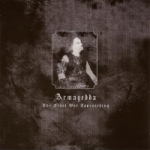 It happens pretty rarely these days that a band that uses corpsepaint and claims to play Black Metal still manages to set free the true essence of evil through their music at the same time. The big commercial sellout and too many mainstream releases unfortunately have turned a whole movement into something completely ridiculous. Countless pseudo Black Metal bands are either wasting most of their time in professional photo studios, putting on their silly looking make-up or caring a lot more about so-called professional, yet rather faceless productions in expensive studios or with the selection of naked chicks to be featured on their stupid album sleeves. Keyboards only get used in order to create some nice’n’poppy melodies instead of an eerie atmosphere and the big common goal for everyone seems to become the next CRADLE OF FILTH, DIMMU BORGIR, MARDUK or DARK FUNERAL. The term “true Black Metal” got a totally new meaning because of all that and ARMAGEDDA is a very convincing representative, luckily still practicing this musical art with its original feeling. The eight songs on their debut album “The Final War Approaching” are all totally raw and sinister sounding, with very grim and hateful vocals and an overall songwriting that basically lives off its simplicity and kinda evil atmosphere (created without keyboards of course!). The band hails from Sweden, originally started out as VOLKERMORD and released one demo in 2000, followed by the namechange and a split-CD with Svarthymn one year later… If I wouldn’t be aware of all that, I would most certainly have guessed that they are hailing from Norway as they deliver music which is kinda close to DARKTHRONE, old BATHORY, CARPATHIAN FOREST, ULVER (“Nattens Madrigal” album), ISVIND or early SATYRICON. So, all in all a very promising debut of a band that hopefully will manage to re-establish Black Metal in its original format again! All hail ARMAGEDDA!