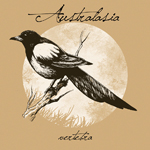 Post whatever… post Rock… post Black… post Metal. No, I do not get it. I hardly can be related to a band playing post-whatever crap. I maybe can recognize some. Nah, I don’t. Now, do I like the style? That is a different question. I guess some songs will have a mood that I will relate to. I always think post-whatever crap is some sort way of saying depressive music… emo music… ugh… but then again, there are some suicidal Black Metal bands which will have a few riffs here and there that will sound a bit powerful and not that suicidal invoking crap. And I must add that I like some ANATHEMA songs from their post-whatever crap era. And I know those are sad, depressive songs… so, this Italian creation, is what I would call a band out of the Metal but with lots of Metal influence. Just the name and the cover art alone would make me skip this one, but trying to be a bit more open-minded (although having a demonic fight inside of me for doing so) I was able to quite enjoy the band. They have the post Black Metal tag attached, and must be honest, they do have a slight guitar tone that might as well be used by some Black Metal bands, but searching more info on the band they cite AT THE GATES as one of their influences so I cannot really say they are that Black Metal influenced. To me it sounds like a Doom Metal almost instrumental album with maybe 50% of the music being more or less metallic and the rest some ambient, acoustic thing, with just a few vocals here and there, which happens to be mostly woman normal vocals. And even with all of this, I find it enjoyable to a certain extent. There are some few blast beats here and there that might sound like Norwegian Black Metal here and there, but they are also covered with layers of many other sounds and melodies that will simply take away that raw aggression in favor of a more atmospheric one. Still, some more dreamy Metalheads will enjoy this one, and I am sure post-whatever crap fans will surely love it. I must confess I find this more interesting than what I thought. But now, if you excuse me, it is me going back to more brutal evil, epic Black / Deathrash Metal. www.australasiamusic.com, www.facebook.com/australasiamusic, www.immortalfrostproductions.com