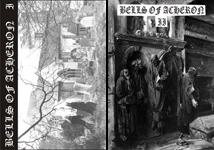 Along with Chile’s COMPILATION OF DEATH, Colombia’s BELLS OF ACHERON is probably my favorite zine from South America these days. It is done in a very professional way (layout, printing quality etc.), yet totally rooted in the old school black and white fanzine style of the late 80s / early 90s. Typical skull and bones borders, old flyers and lots of killer underground bands can be found in each issue so far. And ever since the release of the BELLS OF ACHERON debut issue (# 0) editor Jesus Claros has constantly increased the number of pages. So, what once started out with 44 pages has almost been doubled to 76 pages with this new, third issue (# 2) in the meantime. The musical content is pretty similar to what we feature here, so all those of you who still worship the good old print zines (is there really anyone out there who doesn’t?), will definitely get a kick out of BELLS OF ACHERON. Issue # 2 contains interviews with INQUISITOR, AVERNO, BLACK OATH, NIHILL, DETHRONER, ADVERSARIAL, WITCHES HAMMER / BLASPHEMY / TYRANT’S BLOOD, MARTIRE, DECEASED, DEATH TOLL 80K, HORRENDOUS, ONIROPHAGUS, THY SERPENT’S CULT, DESTRUKTOR, DANTESCO, CYST, ANGIST, VERMINOUS, MIDNIGHT PRIEST, MALAS, LVCIFYRE, DON JUAN MATUS, SLAUGHTBBATH, UNAUSSPRECHLICHEN KULTEN and AMON (US), as well as about 100 reviews of zines, vinyl, tapes and CDs. Issue # 1 (which is still availble as well) offers interviews with HAEMORRHAGE, ETERNAL SOLSTICE, PSEUDOGOD, DEUS OTIOSUS, MASTER OF CRUELTY, NOISE AND SHIT zine, DIOCLETIAN, GRAVE / TORTURE DIVISION, DIABOLICAL MESSIAH, HOODED MENACE, CAPILLA ARDIENTE / PROCESSION, GOREFEST / THE 11TH HOUR / HAIL OF BULLETS, FORCE OF DARKNESS, LUCIFERION, DRUID LORD / EQUINOX, AMON (SWI), EXCORIATE, NUCLEARHAMMER, SADISTIC INTENT / DARK REALM RECORDS, DOMINUS PRAELII and D.USK plus a one page feature on HP Lovecraft and another shitload of reviews. So, all in all there’s nothing really to criticize here, but a couple of advices for future issues should be allowed nevertheless, I guess. Some personal stuff on the people behind BELLS OF ACHERON and / or some introductional words in the beginning of each issue would be nice. Same goes for a little info on how readers, bands or labels can contact BELLS OF ACHERON. And since a lot of the brutal underground bands these days use logos that are extremely hard to decipher, introductions to the interviews would be pretty helpful (yeah, I know you hate them, Jesus…). A short upfront info on each featured band would be a good idea in order to let the readers know what to expect from the following interview and the band’s contact address and / or website URL should definitely be added as well. For some strange reason a handful of reviews in each issue are written in Spanish… that should be changed to English as well, since it’s quite disappointing for foreign readers not to be able to read the zine in its entirety. Apart from that, this zine is highly recommended! For all further information check out Jesus’ facebook site www.facebook.com/jesusclaros.claros or contact him via email at traumarkhan@hotmail.com. A single issue of BELLS OF ACHERON sells for US $8 (air mail included).