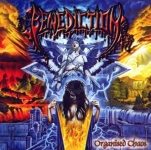 That was simply nothing. I have to admit that it’s been a little while. And to be a hundred percent honest, even more than that. I haven’t listened to BENEDICTION for ages. I regret and vow, that I will change. Because as a huge fan of simple stone-aged D-Beat, and most of the old school Death Metal, I totally find their style appealing. From fist-raising D-Polka to dark, lethal Death. You get the whole spectrum. There is great bass-work, as well as surgical breaks, grim and brutal riffing, nice solos, and an oily, doom preaching voice. Face breaking UK Death Metal. With that said, ”Organised Chaos” has indeed taken their work to its worst. It begins and ends with the adrenaline boosted, redneck voice of Dave Hunt. Even if the idle arrangements on “Organised Chaos“ themselves don’t ruin the record entirely. The voice clinched that matter. And I am not complaining about the lyrical artwork. I do have an ear for simple declaimed poetry, while receiving the uneasy truth. But mixed with his voice it converts to uncreative, pubescent bawling. I know we are reliving the year 2001. Which, by the release date, is already a mess. And I know there was a time when quite a few subcultures were longing for that tense, style. I mean it looked like war, everywhere. Everyone, of course, felt like bawling. But that doesn’t impact me at all. I didn’t like it back then and I still don’t. Looking at the pure, songwriting quality of "Organised Chaos": you won’t receive anything close to what you heard on "The Grand Leveller" or “Transcend The Rubicon“, for example. Here you will be left with the sensation that nothing has happened at all. No ideas, no mentionable riffing, nothing ambitious. Every riff seems to be bored of itself after being repeated twice. Maybe you will find some glimmering lights. Maybe somewhere, but I haven’t seen them. And, for sure, there is bigger crap than this out in Metal universe. But my personal, if conceited, opinion is that “Organised Chaos” is no comparison to their earlier albums. In fact, it’s an uninspired piece of reluctance. Go get it and see for yourself! No… Hurry! They have 2000 re-issued copies… In gold! Even I am impressed with this special edition. Metal Mind Productions says about their awesome sales idea: "..this album will make any Death Metal fan crave for more!“. So let it be an enlightening BENEDICTION. More info at: www.facebook.com/pages/benediction/463721850351250, www.facebook.com/metalmindproductions