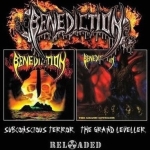 My exposure to BENEDICTION was back in 2004 when a good friend of mine was trapped into everything that was coming out from the UK (PARADISE LOST, ANATHEMA, MY DYING BRIDE, DOOM, BOLT THROWER, CATHEDRAL, NAPALM DEATH, LED ZEPPELIN, SEX PISTOLS, KING CRIMSON, RADIOHEAD, BLUR, etc) and showed me this BENEDICTION album called “Transcend The Rubicon”, he gave it to me so I can stop fighting back with him about not caring for the UK bands. At that time I was (still am) more into the Florida / California / Swedish / Netherland Death Metal sound (that should be a new genre all together), so I was never interested in the UK bands as the sound was more “melodic and groove” (apart from the Punk / Crust bands, those UK Punk / Crust bands were always killer) than the other countries. The cover artwork was made by the one and only, the mighty Dan Seagrave so obviously it had a great impact on me, seeing an album with this type of cover and coming from the UK it caught my attention. “Transcend The Rubicon” is an exceptional album to say the least and a true gem of the genre overall. So, years later I was able to buy their first 2 albums “Subconscious Terror” and “The Grand Leveller”, to my delight I found that Mark Greenway aka Barney from NAPALM DEATH fame was the vocalist for the first album, so when I bought these 2 albums (in 1 single transaction), I went back home and played them while drinking some beers. First things first, “Subconscious Terror” is a bit more primitive sounding record than what BENEDICTION did afterwards, production-wise the sound of the record is magnificent very Punk-ish but not in a low-fi way but a mid / low-range type of Punk production, which fits the vocal performance perfectly, like fish and chips! (special referral for my English pals). The only bad thing I can say about this debut album is that the riffs are a bit generic at times and the drums can be a bit monotonous, otherwise why in hell would you buy a Death Metal album, hoping for something proggresive or else? Now about “The Grand Leveller” what caught my attention was how mature this record sounds compared to their debut album. The songs are a bit slower, longer (1 song less, but larger in duration) and even more “natural sounding”, with a less raw sound but a more polished drum and guitar sound, and the addition of another iconic vocalist to the ranks in the form of Dave Ingram helped this record to give a slap in the face to the rest of the world. To me this album sounds like a mix of New York Death Metal (early IMMOLATION, early SUFFOCATION) distorted guitars, with the slow parts of bands such as GOREFEST and with that “melodic” signature sound that the UK bands have such as early PARADISE LOST, MY DYING BRIDE, etc, even incorporating acoustic guitar passages. Great album. Now some years later, you can get ahold of 2 of the most iconic Death Metal albums coming out of England in 1 single package: digipak, limited to 2000 numbered copies, gold discs. What a bargain (as a bonus this re-release also features all of the tracks from 1992’s "Dark Is The Season" EP and the two studio tracks from 1994’s "The Grotesque / Ashen Epitaph" EP – Frank). Visit www.facebook.com/pages/benediction/463721850351250, www.facebook.com/metalmindproductions