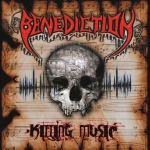 Being unfamiliar with any release of this legendary band after their much acclaimed ”Transcend The Rubicon”, the listening session / study of this re-release was a first acquintance. What immediately stood out compared to older work was the big Thrash / Core influence and the heavily increased aggression. There’s hardly a moment to catch breath and the band pounds non-stop for three quarters of an hour. It shows a more muscular version of BENEDICTION but the quality is high as always. Even the vocals of Dave Hunt, who would later join ANAAL NATHRAKH play a part in this more venomous, unrelenting style. Personally the speed in which these fourteen tracks (originally twelve), including one intro were executed gave little change for moments of real depth and little kept sticking around than a few cool riffs. By doing so it lacks room for more tension and sphere, like what they showed on "The Grand Leveller" or the excellent "Dark Is The Season". All tracks here are definitely not bad, hell no, but the dark atmosphere that that was laid down with colossal class is missed here. I know this doesn’t do any justice to the band and it’s not meant as a reprimand! Pure a matter of taste. In a few short tracks like ’Burying The Hatchet’, ’As Her Skins Weeps’ or the titletrack this new formula works perfect and it reminded of PESTILENCE (”Consuming Impulse”) or some better Finnish Death Metal. In case you missed this album, this re-release of Metal Mind Productions who took care of all the band’s full-lengths in a new jacket is a good opportunity. You’ll get two bonus tracks, namely ’Seeing Through My Eyes’ (BROKEN BONES cover) and ’Largactyl’ (AMEBIX cover) which are done with equal quality. For more info, check www.facebook.com/pages/benediction/463721850351250, www.facebook.com/metalmindproductions