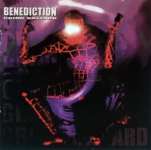 Another part of the BENEDICTION re-release mania from Metal Mind Productions. Besides the double CD packages of the first four albums with all the accompanying releases, the Polish label also made the last album of the British Death Metal institution with Dave Ingram on vocals available again. “Grind Bastard” was initially released in 1998, shortly before the departure of Dave Ingram to join BOLT THROWER, and showed BENEDICTION in their absolutely best shape again. Three years after “The Dreams You Dread”, the bandy remembered their roots and thus reinvented the speed, the crust and the dirt. So, it is no wonder that “Grind Bastard” sounds like BENEDICTION had a living cell therapy. The opening tune ‘Deadfall’ already has a very Punk inspired vibe and with ‘Agonised’, we have the Grind and Crust influences in full swing, spicing up the old BENEDICTION sound in the best possible way. On the other hand, we have a song like ‘Magnificat’ with some guitar harmonies in classic Metal style, that are fitting the song very well. ‘Nervebomb’ even comes along with some Hardcore styled backing shouts and a tempo and guitar vibe that reminded me of NAILBOMB. So, hence the title! Talking about song titles… ‘Grind Bastard’ fits like ass on a bucket, since this long and diversified one is a bastard of old fashioned Grind (not just the hyper speed way) and Death and Thrash influences. Another very subtle highlight is ‘The Bodiless’, that unfolds its qualities in the end with hints on BOLT THROWER – pure coincidence? The much refined guitar harmonies are also a highlight in ‘Carcinoma Angel’, while ‘We The Freed’ reveals the Crust – and even Stenchcore roots of BENEDICTION. At the end of the original album, ‘I’ summarizes all the shades of the album in one (very long) song and serves as a very worthy Grande Finale. But wait! There’s something more to mention here, because what makes “Grind Bastard” very different from other regular studio albums is the fact that it features no less than three (!) cover tunes of varying quality. BENEDICTION’s version of ‘Electric Eye’, the classic JUDAS PRIEST tune, is pretty negligible, since it doesn’t honour the original song in my ears. But ‘Destroyer’, originally by TWISTED fuckin’ SISTER, is very much better, since this one is well adopted to the style of BENEDICTION and another hint on the fine taste of those who did the cover. Finally, there’s the ANTI-NOWHERE LEAGUE drinking anthem ‘We Are The League’, done in BENEDICTION style and initially only used for the digipak. version of “Grind Bastard”. Well, to be honest, it’s just a little more metalized in comparison to the original, but it’s a reason to raise your glass or coffee pot to celebrate a damn great BENEDICTION album. Maybe it’s even my fave album of them, but that’s no wonder, looking at the diverse influences and the massive return to traditional virtues. Time to look for more at: www.facebook.com/pages/benediction/463721850351250 and www.facebook.com/metalmindproductions or www.metalmind.pl