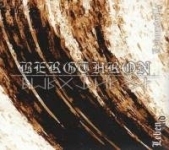 First of all, I need to make clear that since I do only have a promo, I cannot say much about the packaging of the first edition which comes as a 3-CD-version, probably very similar to EMPYRIUM’s “Weiland” album, but that is only a guess of mine. However, even judging the music only is very tricky in this case. I have been following BERGTHRON from their demo until their second full-length album, but I am not aware of their third album “Faust Für Faust”, so that might turn out to be the missing link between their past, their present and their possible future. The band has actually dropped most of its keyboard-loaden Black Metal to integrate more Death Metal orientated parts, some parts that are actually rather Rock than Metal at all and a couple of acoustic parts with flutes etc. The use of the bass is interesting and not very common for that kind of extreme Metal, but also far more traditional. The vocal style has changed as well – clean vocals and some grunts are what one can find nowadays most of the time, the harsher parts were reduced to a minimum. Surprisingly, this mix of styles works quite well. All previous outputs were at least average in my book, sometimes even better, but that depended a lot on my mood, and despite its stylistic change, this can be said for this album as well, and it definitely is a grower. When I first listened to this album, I couldn’t make much of it, since it is neither fish nor flesh, but by giving it its time it turned out to make sense, and while this is not an album I will listen to very often, I am pretty sure it fits in certain moments. The only weak point of this record is the female vocals, which however are not that frequent anyway. My advice for anyone into decent Pagan Metal that you cannot compare to any other act from the very beginning, is to try it out before buying it, as it is certainly different and needs its time. That however implies that it is not completely useless like so many other Pagan releases of today. www.pervertedtaste.de