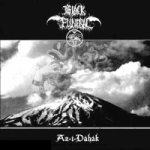 Six years after its demise in 1999, BLACK FUNERAL raises its ugly head again. But now this project led by the sick mind of Michael Ford appears in a slightly mutated form, both musically and lyrically, even if the fundaments of BLACK FUNERAL are still easily recognizable. Certainly because his involvement in some Industrial / trance projects after the initial BLACK FUNERAL split up, Michael Ford has chosen this time to let the electronica do the talking. If there is any guitar on this album, the sound is so much processed that it is almost undistinguishable from the synthetic sounds unleashed on us poor humans. But don’t get me wrong, "Az-i-Dahak" is first and foremost a pure Black Metal act of the gloomiest type. Even if the drums are programmed (and kept very unrealistic sounding) this element adds even more strangeness to an already very uneasy record. It fast becomes impossible to resist to the sick and weird BLACK FUNERAL world; the overall atmosphere on this disc could give you the creeps in no time, it is very disturbing. One can’t connect what is going on here with any other Black Metal act, well maybe fans of MYSTICUM or ABORYM could recognize something familiar here, but BLACK FUNERAL are on their own really. The pacing stays fast from the beginning to the end, the foul lyrics are spat with a sort of possessed hatred, distorted sounds effects pop up here and there, and the structure of all the tracks are minimal, like it was the case on the rest of the BLACK FUNERAL discography. All I can say is that "Az-i-Dahak" is a very original sounding album, a passionate experience to live. The esoteric lyrics reflects the not-of-this-earth music; Michael Ford left behind his obsession about lycanthropy and vampirism to concentrate on the most obscure parts of the old Persian mythology and dark knowledge. See this as a nightmarish version of what MELECHESCH are known to deliver. We face here a hate it or love it situation. This record is to me absolutely essential because of its obvious creativity. But I can understand its experimental nature (but remember that the core of this music is classic Black Metal though) could repel some of you. Investigate at: www.behemothproductions.cjb.net and at http://blackfuneralcult.cjb.net. Apocalyptic Black Metal indeed!