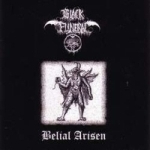 This is not a new record as it came out in September 2003 (more than one year ago then), but I acquired it only very recently, and I simply can’t miss the opportunity to review this masterpiece for VFTD. This album you can shelve next to "The Return…" and "De Mysteriis Dom Sathanas" without any problem, yes, it is that good. Let me warn you that the sound quality on this album is atrocious; but far from being a setback, this point makes "Belial Arisen" even more awesome. You know, superior Black Metal is about building a frightening atmosphere, this music has to communicate a delicious feeling of menace and of exciting danger to be fully credible. BLACK FUNERAL made (the band is no more unfortunately) a music coming directly from the very depth of Hell. Imagine a hybrid of first era BATHORY (for the great atmosphere) and VON (for the hypnotic linearity of the songs and their crudeness as well) and you will get a precise idea of what BLACK FUNERAL have to offer to you. A pity that the band’s mastermind, Michael Ford, is now exclusively involved in the electronic and experimental music scene (even if he has kept his interest in the macabre doing so). Like I said above, the album is not produced at all, the songs seem being recorded on a poor cassette deck with a mechanical problem (the sound suffers of a cyclic loss of power, to the point this gives the impression of a designed effect in the end). The drums parts don’t vary at all, the pace remain identical from the beginning to the conclusion of the album, on very fast mode. The guitar riffs are extremely simple and have an archetypal value; it is like Michael Ford had found the hidden source of pure Black Metal and tapped directly into it. The vocals are also punishing, demented as if Ford was possessed while recording them. "Belial Arisen" is a true masterpiece; this is the epitome of Black Metal. I feel a little frustrated while writing this review, because it is obviously very difficult to really transcribe into words what I experienced while listening to this blasphemous record. Some mp3 are featured on the label website anyway, with biographical precisions about BLACK FUNERAL. Don’t miss this fucking amazing record, the kind you got only once every five years. Get the info at: www.behemothproductions.cjb.net.