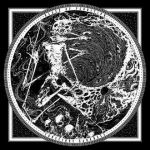 It was a dark night, the winter season had just kicked in, though it wasn’t as cold as it could have been, but the wind was howling, and as I live near water it was quite intense, the few trees standing near the shore of the fjord were living in jeopardy, as each blast of wind could take them down. I struggled through the small storm, into my warm and cozy cave, and was starting to warm up to the next release I had to review, as the moon glimpsed shortly through the thick cloud of skies, as I pressed play and "Conscious Darkness" from the Polish horde BLAZE OF PERDITION began – and hit me like a freezingly cold blaze from the northern sky, and blew me backwards physically and psychologically with the eerie, chaotic darkness engulfed in an evil and black atmosphere, only enlightened by the small furnaces in the remnants of hell. The music BLAZE OF PERDITION delivers on this four track record is a vortex of blasting and evil darkness, the perfect mixture of what they so far have been building up to, a dark glimpse to the straight forward and eerie days, when they were known as PERDITION to modern blasting progressive Neo Post Black Metal or what a vicious mix of first, second, third wave and "Conscious Darkness". The ambience the band builds up is immense and all consuming, I’ve been impressed by a lot of the work by these fellows, but the four tracks on this new record, is above amazing, and manifestates BLAZE OF PERDITION as one of the leading lights on the modern Black Metal sky. Musically and songwriting wise it is very well build up and delivered, stellar swamped in a perfectly fitting insanely evil production, clean making every detail audible, though still murky and grim so it feels raw when needed, and musically – riff and melody-wise we are still being fed the references to the good old times when the Scandinavian Black Metal scene was on its heights, all hail! "Conscious Darkness" is a massive experience that pushes all buttons, and is really well delivered and produced, there really isn’t much more to say! Enter the warfare here: www.facebook.com/blazeofperdition, www.agoniarecords.com