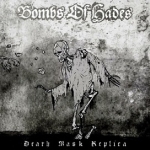 BOMBS OF HADES are a Swedish old school Death Metal band but they do things with a Crust / Punk attitude. The sound is pretty much an extension of the Crust leanings, but over here they’re superbly integrated with Death Metal, which simply put, livens up the proceedings. The energy is noticeably intensified and the album rarely loses its way – the D-beats and up-tempo music make sure there’s enough for us to remain entertained. Straight-up Death Metal bands are clichéd; we need something like this to sustain the interest in the style. BOMBS OF HADES, with members of GOD MACABRE, UTUMNO, ABHOTH, among others, are at it since almost 15 years but haven’t perhaps received the credit they’re due. It’s probably due to the fact that they’re doing something relatively unconventional, using their inherent Swedish influences which can pertain to the classic ’90s era Death Metal sound propagated by the like of NIHILIST, ENTOMBED, DISMEMBER and UNLEASHED as well as the Swedish Crust / Hardcore bands like SKITSYSTEM, DISFEAR and WOLFPACK / WOLFBRIGADE. BOMBS OF HADES sit right in the middle of all that and create music that takes elements of both, without essentially diluting them, and delivering music with panache and determination. Starting off with the title track ‘Death Mask Replica’, the music takes a while to go all guns blazing but the buildup is effective and from then on, there’s an active onslaught that puts you through a nostalgic trip of bands both Crust and Death. There’s usually a sense of urgency, of something that will get you up on your feet and start moving, protesting against something or the other, whichever excuse that sounds best to you that instant. It has the makings of Grindcore minus its flat-out intensity, as BOMBS OF HADES keep it somewhat mid to uptempo, taking breaks every now and then to indulge albeit too much in old school Death Metal style solos or slow hooks or riffing parts. ‘Burning Angel (Uhuru)’ is a seven minute slow burner, reminiscent of “Wolverine Blues” era of ENTOMBED yet slower, but the march continues nonetheless, and the rest of the album sees the songs scampering across, in breaks, right till the end, making for a mildly invigorating and somewhat memorable listen, laden with enough tempo variations, seething and melodic solos, and a scrumptious crusty raw sound to boot. “Death Mask Replica” could be slightly more exciting, as things tend to get a little placid from time to time, especially given the Crust – motivated nature of the music, but with all said and done, this is a commendable effort from BOMBS OF HADES, recommended for all those who like their Death Metal catchy, riffy and spiced up with Crust / Punk influences. All further information at: www.bombsofhades.com, www.facebook.com/bombsofhades, www.war-anthem.de