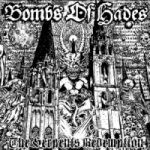 Shortly after the re-release of the fantastic debut album "Chambers Of Abominations" on CD (for a very long time available on vinyl only), mighty BOMBS OF HADES from Sweden are calling out round number 2 with a first release on CD via Pulverised Records. What isn’t bad at all. Because all friends of the black gold will soon be served by a vinyl release via Blood Harvest Records. There is no reason to complain here. Also on "The Serpent’s Redemption", BOMBS OF HADES aren’t delivering a 100% true Death Metal album. Why should they? If you are a follower of purity requirements, better stop reading now. But if you are open-minded and searching for a little challenge, you are welcome in the nasty and filthy world of BOMBS OF HADES. The guys succeed again in mixing Swedish Death Metal with some special ingredients from the Hardcore Punk, Rock’n’Roll, Garage Rock, Noise Rock and Progressive / Art Rock universe. All very authentic and credible arranged and played by the guys. Nothing here seems to be forced or artificial. Sometimes you will get the impression listening to a horror movie soundtrack during the instrumental sections. Thanks a lot to the effective use of the unholy mellotron. Fans of ENTOMBED, DISFEAR, etc. should take their chance to listen to BOMBS OF HADES quick. Of course on "The Serpent’s Redemption" you won’t get tortured by a dead digitalized production. Everything is natural and handmade by real human beings. These Swedes really brewed a highly enjoyable brewage here, you shouldn’t miss. Don’t be late and check them out at www.bombsofhades.com, now. Voices From The Darkside loves BOMBS OF HADES… Rock’n’Roll!!!