This is something I have waited for since many many years: a musician from one of the most underrated Swedish Death Metal bands founded a new band playing Death Metal the old way. Here we are not talking about a bunch of youngsters trying to play like their influences; here we are talking about an influence. The main figure in BOMBS OF HADES is Jonas Stålhammar, former main-songwriter from my all-time-faves MACABRE END / GOD MACABRE, and he succeeds 100% in what he tries to play: "some kind of old school Death Metal à la 1985-1990" (quote: BOMBS OF HADES’ myspace-page). Next to Jonas (who played in ABHOTH and UTUMNO, too) there’s Magnus Forsberg (former member of TRIBULATION and probably Sweden’s tapetrader #1 in the late 80s and early 90s according to Daniel Ekeroth!) and Anders Ekman (former member of ABHOTH). Does this make BOMBS OF HADES somekind of an "all star" Death Metal band? Guess not, but they are part of the Death Metal underground history and that needs respect! The first time I heard the BOMBS OF HADES tunes on their myspace-page I simply couldn’t await to hold something official in my hands as the songs sounded so refreshing and great. I can hear the GOD MACABRE vibe living on in these tracks especially when talking about the guitar work and solos. It’s five songs which you get here in the Swedish Death Metal sound around 1985-90 as written above and if there’s one definite successor of GOD MACABRE it can only be BOMBS OF HADES. From my point of view I’m sure a good deal won’t last too long as the time is right again for old school Death Metal. The question is if the guys here are taking the whole stuff serious enough or if they just see it as an extensive hobby? Perhaps an upcoming interview with them will answer this question among others but the most important fact here is that it’s old school Death Metal time here again and Blood Harvest Records are the ones to praise once more as they financed another awesome release and soon-to-be-classic. Check this marvellous 7"EP out as long as it is available. Sooner or later it could be as rare as GOD MACABRE’s "Consumed By Darkness"! www.bloodharvest.se 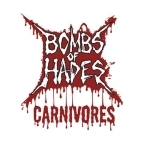 If worshippers of old skull Swedish Death Metal warfare wanting something to be kept on press, then thy will most be done. This 2013 re-press of this tiny slab comes with exactly the kind of Metal of Death I remember it for: brutal, guitar orientated, short and to the point sound that recalls in a very good way a lot to ENTOMBED in their “Clandestine” days. And as that album is probably among something of the best Sweden has erupted, I am totally fine with that. This essence I must admit got a bit lost for the recording of their debut album. But, fear no more, this re-press is here to satisfy those wanting to hear this abominable beast again. Yes, I know that there is a big Crust, dbeat and Punk influence, but then again it is turned into the morbid way of sound by the band, which as for now, you must know is formed by veterans in the scene, which in this case seals with quality (and pure darkness) what you will be listening. This is one of those recordings that age with majestic light…which will untimely take your life away. www.bombsofhades.com, www.facebook.com/bombsofhades, www.bloodharvest.se