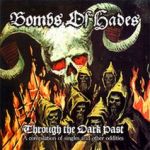 BOMBS OF HADES
Through The Dark Past
(Pulverised Records)
57:43min

An anthology of BOMBS OF HADES’ non full length releases, and there’s been a great amount of EP releases from the Swedes, and a release like this is damned nice, as some of us were asleep when the bastards where available for sane prices, and not the insane amounts the speculation in vinyl has brought with itself. The Swedes have made tons of great music, and a big load of it, is to be found on the smalls gems released throughout the last 5 years, and on top of that we have four spanking new cuttings! If you shouldn’t have heard of BOMBS OF HADES yet, seriously, do you like Metal??? It is the bastard child of Jonas Stålhammar who has done time in a wellknown and legendary Swedish band or, well, quite a few (my favorite is UTUMNO) and he has teamed up with three like-minded bastards, and they have been churning out a relentless and punishing blend of traditional Swedish Death Metal and Crust, the punkish political raw Rock’n’Roll from the English mid 80s. I’ve been hooked by this band since I first laid ears upon their music, and when that was and what song / release I can’t really, though my best guess is when Soulseller Records did their part of promoting the awakening of the Swedish Death Metal scene with "Resurrected In Festering Slime", where BOMBS OF HADES where represented with ‘Carnivores’, a devilish addictive and catchy tune. The band is masters of writing catchy yet grim and raw tunes reeking of good old Death Metal, with the energy and attitude of straight up Rock’n’Roll and more aggressive and frantic Crust, a mix that makes your body slam in sync with the tracks and the madness therein. They have throughout time, delivered everything from straight up Swedish Death Metal, to hellish Hardcore, tunes bordering Grindcore and pure Crust. And when all the elements team up in (un)perfect harmony, it is hard to find better and more intense music. "Through The Dark Past" is a great catching up album and history lesson (or lesion) in BOMBS OF HADES’ evolution since the beginning until now, and showcases quite a couple of handfuls killer songs, some nice cover tunes and a good deal of hard to get releases, all on one compact disc. Nothing beats the original vinyl releases, though if missing those, this comes close, and as good as it gets. The four new tracks, where one is a cover of ZEKE’s ‘Evil Dead’ are quite heavy and doomy, nice and raw, I like the take on the tracks, a bit darker than usual, and not that fast, slow-paced and trance inducing, especially the first tune ‘Crossturner’, Tom G. Warrior would be proud, if he laid ears upon it. ‘Kill! Kill! Kill!’ is continuing the a bit more uptempo Hardcore style the ZEKE cover provides, but a but more fierce and raw, lastly we have ‘Epilog’, 2:30 minutes of utter darkness and despair, with an epic touch by the guitars, do I sense BOLT THROWER?! I like where this is going, though wouldn’t be surprised if the next release, is ending up going somewhere completely else, that’s BOMBS OF HADES in a nutshell. This is the end of the human race: www.bombsofhades.com, www.pulverised.net