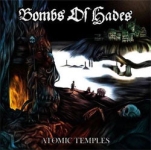 It’s been a while since I wrote my last review for Voices…, but when Frank offered the latest BOMBS OF HADES album, I couldn’t refuse. I’m always more than thankful for some high quality music, which is also suitable for Voices… zine. Too bad, that there is more quantity than quality these days. Thankfully in the unholy house of BOMBS OF HADES the world is still more than just good. Their 3rd full-length release "Atomic Temles" is again awesome! These guys are delivering again, what their fans are requesting or what every listener of Scandinavian Death Metal (the open minded way) could ask for. The songwriting is first class, the musicianship is first class, the production is filthy… nasty and raw and btw… first class. But still translucent and heavy as shit. Especially the drum sound rules. Sounds like there are still flesh and bone drummer out there, who are beating the shit out of their drum kit. The attitude is so much in the correct place here. Also the band is proofing humor with the cover artwork, aren’t you? ; -) The only weak point on "Atomic Temples", in my opinion, is the instrumental / sound / voices collage called ‘Crawling Wind / The Tyrant Embryo’. With a total album running time of 38:35 minutes this piece of sound is much too long and totally misplaced at # 6. Sorry guys. Better place such a weird piece of music as a kind of an outromental at the far far far back. Anyway, I’m just complaining on a high level! Perhaps I better shut up now and go back listening to BOMBS OF HADES’ new killer release "Atomic Temples". By the way, this is what you also should do. Go and get this little masterpiece earliest in a physical way. This is the 3rd full-length round (between many many 7 inches and split releases), so BOMBS OF HADES are deserving your support. Just in case you have never heard of BOMBS OF HADES before. Then it’s urgently time for you to catch up with these guys. Horns up and cheers to BOMBS OF HADES and their heavily Mellotron playing Jonas Stålhammar!!! \m/ www.bombsofhades.com, www.facebook.com/bombsofhades, www.war-anthem.de