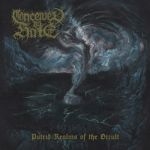 It took El Salvador’s quite well known Death / Thrash act CONCEIVED BY HATE about four years to come up with some new stuff to follow up their 2016 album “Death & Beyond”. Maybe it’s because they turned from a full band to a solo project of Morbid (or M.Q., as he was named before). And being involved in active bands like MORBID STENCH and DISORDER, a solo project might not be of top priority. But that’s idle speculation. The fact is: “Putrid Realms Of The Occult” is the third album from CONCEIVED BY HATE. And the question is: does the split with the other members leave any effect on the sound of the band? After listening to “Putrid Realms Of The Occult”, I tend to say: not really! The musical direction of CONCEIVED BY HATE has changed a bit, making them sound more Swedish than ever. The songs and riffs are based on the Death Metal sound that is so typical for this country. Just listen to the opening ‘Nihilistic Ecstasy’! But that’s not all there is to say about “Putrid Realms Of The Occult”, of course. Sometimes the Death / Thrash sound of the earlier days of CONCEIVED BY HATE shows through the brutal riffs and the d-beats of the drums. And in addition, there’s a very nice dose of doomy and low-paced grinding parts slowing down the massacre. The fine ‘Drowned In Tomb Mold’ or ‘Corpsetellations’ serve as good examples here. Sometimes a little bit of the Gothenburg school of Death and Black shines through as well, making “Putrid Realms Of The Occult” a pretty varied and diverting joy for all lovers of Death Metal. The vocal delivery of Morbid is fine as well, since he sounds like Martin van Drunen with a massive Black Metal touch. Fortunately Morbid didn’t make the mistake some other solo (or one man) projects did before, using a drum machine. Instead, former CONCEIVED BY HATE drummer V.K. did a very good job as a session drummer here. Thus I can only state here that “Putrid Realms Of The Occult” is of course not the most original album this year, but a more than solid Death Metal album all the way. Songs like ‘Into Cemetery Fog’ or ‘En Las Aguas Del Súcubo’ (to mention some other fine songs as well) should please anybody out there loving the genre. If you want to find out more, visit the band at www.facebook.com/conceivedbyhate and check the sites of the two labels involved, www.satanath.com and www.morbidskullrecords.com