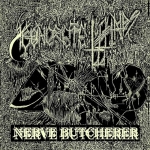 Formed as the spiritual successor of VORUM, this is the second assault from this entity vomited in Finland. Actually one can hear some similarities to the former band, just maybe with a more brutal approach that at times reaches a War Metal like sound, not far from early BLOOD or SARCOFAGO. But it actually stays more in the fast Death Metal realm, in the MERCILESS and early MORBID ANGEL vein. There is obviously a demented Thrash Metal attack in here that recalls very early SLAYER and KREATOR. Again some 25 years ago it would not be wrong to call them Grindcore. At times the names of early SADUS, early CARCASS and the short lived but intense FACE OF EVIL cross my mind while listening to this raging inferno that will torture the souls of the unsuspecting victims in less than half hour of punishments and audio torture. This is the kind of Metal that still scares old ladies and religious fanatics, without becoming a joke but still being fun. Evil, well played at absurd speed and with those nauseous lyrics that would make you just head bang and drink beer and piss in euphoria. Death, Black and Grindcore fans will definitely find something here. The cover art is also a reflection of the way the band creates (or desecrates) its music. Yes, there is absolutely nothing new here and probably already done before, but when it is this good, who the heck cares? Not me… let it rain vomits and blasphemies! More info at: www.facebook.com/aggressivenoisetorment, www.facebook.com/sepulchralvoicerecords