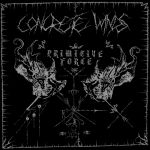 More manic blasphemies from Sepulchral Voice Records’ ferocious catalogue. CONCRETE WINDS belong to the VORUM and, possibly, DEGIAL’s obnoxious family, albeit a certain veil of uncertainty is left on who the exact partners in crime are. That being said, the brand new "Primitive Force" has something in common with VORUM’s final EP, 2015’s "Current Mouth", but with a fairly reduced dose of dynamics and sense of songwriting. What we have here is high octane, hyper-charged blackened Death Metal that might recall the spirits of ANGELCORPSE, early MORBID ANGEL and maybe a more trebly version of DIOCLETIAN grinded in a flithy blender of proudly unadulterated lo fi-ism. According to Sepulcral Voice’s own description of the band, this album still has musical ambitions. As far as the music goes, CONCRETE WINDS’ only aim is the complete obliteration of the listener’s vestibulocochlear nerve. No twists, few unpredictable stunts and little variety here, except for the slightly jumpy and somehow rocky upbeat tempo on ‘Tyrant Pulse”s verse, which weirdly reminds me of MARDUK’s more recent records. ‘Death Transmission’ is possibly the most varied track of the platter. Nothing to say on the band’s blast-beating technical skills, but the “full on speed assault mode” is a very limited resource whenever used alone. On the other hand, you get lots of feedback, compressed, clipping-friendly energy and free-wheeling fury. Yes, beefy doses of fury. Check out CONCRETE WINDS on www.facebook.com/aggressivenoisetorment and www.sepulchralvoice.de.