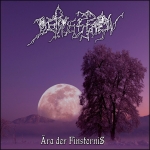 In 2015, DEPRESSION celebrated their 25th year of existence with their 4th studio album, “The Dark Dimension”, where they showed themselves more varied than ever, in addition to classic Grind eruptions, groovy mid-tempo smashers and crust elements. As time marches, on the first day of September 2020, they crossed the 30-years benchmark and this time choose to celebrate it with the jubilee full-length album “Ära Der Finsternis”, where 30 songs, in exactly 70 minutes beholds pure DEPRESSION music, including the song ‘Master’ from MASTER as the obligatory cover song, plus the “Ein Hauch Von Moder Pt. II” EP re-recorded as bonus tracks, with guest vocals from Marc Grewe (ex – MORGOTH). Although they have been stirring up the scene with their groovy Death / Grind since 1989, the Germans apparently never got out of the moldy underground. In addition, DEPRESSION have never been particularly keen to tour and have made themselves comparatively rare on the stages of the Grindcore world. Possibly, which is why, despite creating a distinctive legacy, they never really get mentioned as much as their compeers do. Also, where bands in this hybrid genre, like an oath deals with politics and anarchy with their uncompromising and power throbbing style, DEPRESSION have taken the clandestine roots of BLOOD and expressed them in a crusty, muddy and oppressive style of their very own, which pleads for endurance over thrust. Their style did not change since their debut EP “Ein Hauch Von Moder”, and during this long period, they have released four demos, seventeen splits with various revered bands in multifarious formats, six full length studio albums – where all releases contain groovy Death / Grind with a powerful, heavy but still raw sound, and always a cover song is included. Founder and mastermind, Kai “Swinger Of The Axe” Sattelkau (ERODED, ex – ANIMUS, ex – DISMAL), who started the band as a solo-project back in 1989, later combined with Marc Miekeley (ex – ANIMUS, ex – DISMAL) and their contribution in songwriting, guitars, bass, drums, vocals, keyboards, lyrics, layouts and recording, upheld that DEPRESSION never became a typical Death / Grind act. But influenced by old school Death Metal and mixed that with Grindcore, they forged a special DEPRESSION sound that exists for over 30 years now. No exception in “Ära Der Finsternis”. The first thing to strikes is the very lively and organic sound and the production quality, which is far intelligently maintained than on tons of studio albums by contemporary acts. It’s effective, old school, dirty, raw and heavy grinding Death – just the way we like it. The dual growling really gets full effect when backed up by the grinding drums and hammering string work, accompanied by the psychotic screaming of Kai. It’s simplistic, intricate or just plain brute force, but it never lacks in energy nor groove. The dense and intense sound may leave anyone for craving loads more, when each track is suddenly over after just a few minutes. Also, all over, excellent display of effective riffing, along with the pummeling bass sound and intense guitar, with some doomy also utterly horrendous passages, will stick with you. So, when you’re in the mood for catchy Death Grind, “Ära Der Finsternis” can take over. But in your depressed mood, it will also take over with enticing compositions and thought-provoking song titles – which reveals their professionalism and strength on all levels. And also visually, in the same vein of “Unglaube”, “Die Dunkle Dimension” and “Dekade(nz)”, the awe-inspiring album cover art envisioned by Ron Sanders, invoked the essence of what the album title refers, “Era Of darkness”. No wonder, it’s extraordinary, how DEPRESSION keep defining and refining their own tradition and in each new release like “Ära Der Finsternis”, they reinterpret the play of the same name and breathe new life into the rancid carcass over and over again! Explore more about the band and label here: www.facebook.com/depressiongrind, www.facebook.com/rottenrollrex.de.