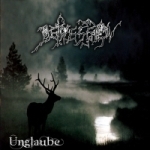 It took some time, but this split between Germany’s Death / Grind underground masters DEPRESSION and the Swedish bosses of Death Metal with Crust influences, PAGANIZER is finally out. On one side we have ten new songs from the Germans plus an intro and outro, and from the Swedes a compilation of ten tracks of different origins. But let’s start with DEPRESSION, who have more than one surprise for us with this recording. To start with, and being one of the strongest points, I would mention the production, which this time was done by Skaldir (best known for his project HEL and an ex-member, together with DEPRESSION’s vocalist Ron, in APHELION). It is simply perfect for their music, leaving a little of rawness and giving more power to it, especially on the vocal side. There is no doubt that it’s the best production they had in their entire career. You can hear it in the guitar sound too, especially in ‘Modertau’, maybe the most modern track they ever recorded. But don’t worry, they still keep playing that old schoolish Death Metal crossed with some primal Grind and even some strong Punk remnants that surface again in ‘Wipe You Off Life’s Page’ and ‘On The Edge’. We can still say that this is their most Death Metal oriented recording, together with the tracks they recorded for their upcoming split EP with INHUMATE. The simplicity of the songs make them totally groovy, from the fastest ones to those heavy riffs that they are best known for and which would make anybody break its neck. Oh, and we shouldn’t forget that they included a cover version of ‘Artefacted Irreligion’ from the gods BENEDICTION here as well. A quite complete work for everybody who has fun with this great act, which is almost cult in the European underground Grind scene. Going to the side of PAGANIZER, the trio assembles some tracks here, nine in fact, which come from different recordings, like their split with ERODED and others which I couldn’t find out, although some sound like demos or similar. They start with ‘This Place Is Rot’, which is total BENEDICTION (what a coincidence) and NECROPHAGIA worshipping, yet keeping their old school Swedish Death and Crust smell on most of the tracks. They contribute the following tracks to this split release: ‘This Place Is Rot’, ‘Abortion Van’, ‘Gasmask Obsession’, ‘Hell Is Already Here’, ‘Grinded And Exiled’, ‘Flashnaut v1.0’, ‘N.Y.Ripper’, ‘Untitled 1’, ‘Untitled 2’ and ‘Untitled 3’. I should say I didn’t like one thing too much, as a consequence of being a compilation, and that is the difference in the production between the songs. It makes it a bit hard to listen to the CD. As usual on Suffer Productions, two underground Death Metal albums for the price of one, even if this time we have two wellknown bands here. And I should also mention the artwork, which is way better compared to the ones of their previous releases (well, Sore’s one was quite good too) and I also shouldn’t forget that the CD includes two videoclips, one is DEPRESSION’s ‘Leichenduft’ (from their split with MESRINE) and the other from PAGANIZER’s ‘Gasmask Obssession’, which was on the ERODED split and on this CD too. www.suffer-prod.de.vu