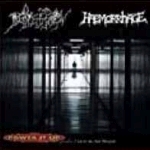 Catching the air bridge Madrid / Dortmund via airline Cudgel we find two pathologically demented monsters called Depression and Haemorrhage, that invited us on a trip with an old school Death and Grind like final destination. The first part is commanded by the trio Depression, a veteran band from ’89, that already released several EP’s, demos and more. This is Death Metal in the old vein, with a lot of grind influences as well (Impetigo is shining through quite often). A good combination of both styles, with lots of blasts beats. Everything is very rhythmic and with a thundering voice. They somewhat remind me on their countrymen Blood, and like I already mentioned Impetigo. Among the 11 songs we also find a version of the AGATHOCLES track ‘Enough’. The turbulences during the second part of the trip are caused by Madrid’s pathological gore grinders Haemorrhage, that celebrate their 10th anniversary with a live recording. Among their own rotten and demented material the tracklist also includes cover versions by Impetigo and Carcass. So, needless to say that we enjoyed the short trip. HOW MUCH GORE CAN YOU TAKE??