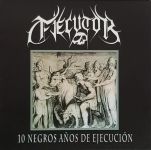 Formed back in 1999 in Chile, a scene that is most likely at the top of the world since a few years now, head to head with any other country you can think of in terms of quality and quantity of bands, this is a compilation of demos and EPs from this band that has not changed that much since its inception in a very violent and dark type of Death / Black / Thrash Metal not far from early SODOM, DESCTRUCTION and SLAYER. The riffs are simple and in-your-face with a typical raspy voice and although the recodings are taken from various sessions, they all share a raw, yet powerful production that only the South Americans can achieve. Obviously that coming from a country opressed by religion and politics, there is a lot of rebellion and anger in the lyrics, specially against the religion that tries so hard to dominate the truth. As the songs passes by, you can also hear some sort of progression from the sound and execution of the songs, as the demos have a certain old school Grind sound, yest still having a Death / Black / Thrash origin whereas the latest recordings have a stronger evil Thrash sound. Fans of violent Metal that invokes the dark one will surely have their (blackened and rotten) soul possessed by this band. As a matter of fact the band already has 2 full length albums released, both well worth the time hunting down. Oh, and to add insult to injury their invocations are done in Spanish, a langauage where blasphemies against religions have a stronger effect. This is the case where we have heard it before, where there are other bands doing the same, some even better some even worse, but by all means, we enjoy a lot these chants of blasphemy and destruction! Label contact: traumarkhan@hotmail.com