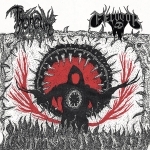 EJECUTOR from Santiago, Chile and THRONEUM from Poland, both now crossing an admirable career of playing Death Thrash and Black Death respectively, spanning over 20 years. However, this self-titled split, which was released on 2021 (limited to cassette only) was the first time they collaborated something together. This split comes into light specially to commemorate the memory of NecroTerror (bass player for EJECUTOR), who passed away on September 11, 2021. As both bands playing two different genres, so initially it was provoking to hear what’s offered here. The split begins with three tracks from THRONEUM and immediately reminds why these Poles are considered as purveyors of some of the most cruel and obscure sounds. Of course they play totally archaic and old school Metal, influenced by the great ancient bands, but at the same time THRONEUM clearly has something possessive in their sound which managed to create their own sound and style. The two originals they contributed here are really punishing from the very start and you have to listen to them for a few times to get the motif of the whole thing. This continues on with ‘Kaang The Praying Mantis’, which has a more straight forward feel to it, with a ripping guitar lead. They end their part with a cover of ‘I Wanna Be Your Dog’ by THE STOOGES. Those of you who heard the original, be prepared to get shaken. The EJECUTOR side of the split will come as a defiler. The Chilian Death Thrash force contributed three originals and be prepared to get axed by their “Executioner” sound. The opener ‘Armaggedon’ is just a hostile piece and anyone not exposed to them will instantly get the sound of this band that they have been delivering since they started. Leonardo Matamoros (drums, vocals) spitted fire throughout and his singing in the chorus of ‘Armaggedon’ will remain chanting in your head for long. Next ‘La Entidad’ and ‘Ritual De Protección’ come forth with more intensity, especially the drumming of Leonardo feels like menacing hammering. It will be noticeable that all the tracks are appealingly shortened to the point (makes perfect sense with a 27-minute playtime), yet sound loud blasting. And the Chileans completed their contribution with a classic MORTUARY DRAPE cover ‘Primordial’, which surely made the end an enticing one to say the least. Altogether this split with the mix of two forever tempting styles shall lure the fans of the bands and also should be a good exposure to anyone unaware of their existence. Triumvirate Of Evil Records, now released this split in CD format (limited to 500 copies), available worldwide. To know more about the bands, visit and contact www.facebook.com/throneumofficial, legionejecutor@gmail.com, www.facebook.com/triumvirate-of-evil-records-345474882236469