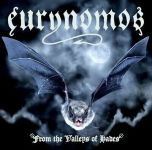 EURYNOMOS
From The Valleys Of Hades
(Iron Pegasus Records)
49:33min

Black thrashing madness from the depths of Germany, by four gentlemen who seem to be possessed by the grim and raw sound of Black / Thrash Metal from back in the day! Aethon and Magma do their slaying in MEGATHÉRION, when not being busy with this band, Okkulto did his service in DESASTER back when the kicked some serious arse, so those lads are familiar with penning and delivering this kind of musical bastardness. Only Vesuv strays from the path of ancient darkness, with STIGMATIZED, that is all about technical Death Metal, though he still knows to handle the drums when it becomes old school! The band started out in 2014 and released 3 EPs during 2015 and 2016, all three slaying, taking me back in time with the raw and relentless thrashing Black Metal attack, it could have been written and recorded in the 80s, without the music in any ways being outdated. Now we are writing 2020 and the quartet is finally ready with their first full length attack “From The Valleys Of Hades”, and to be honest, it is an album worth the wait, even though I had to give it quite some spins to get into it. Why did I have a hard time getting into the album, now when I was totally into the EPs? Well, the sound isn’t as raw as on the EPs, which I reckon is one of the things. Secondly the band has evolved quite a lot. Don’t get me wrong, the music is still grim hard thrashing Black Metal or the other way around, but damn, the music is much more varied and spiced up. There are a ton of great guitar leads, making the music more fresh and alive, even parts where it seems obvious the songwriters have been listening to more modern Black / Thrash anno the mid-nineties and a tad up, and not only the grim 80s, which actually works quite well. The main theme is still the trademark dark atmosphere, headbangable main guitar riffs, the pounding rhythm patterns and the grim and superb vocals from Okkulto. Though the tad clearer production making a bit more room for the instruments, is actually doing the music good, especially when we get so much great guitar work, and the dark atmosphere is kept intact and slaying. Perhaps the album of the year? Enter the tower of limbs and fevers: www.facebook.com/eurynomosofficial, www.iron-pegasus.com