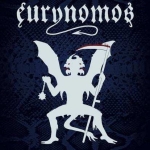 EURYNOMOS is a band formed in 2014 featuring Okkulto (the vocalist in DESASTER’s first three albums). In this past couple of years they released three 7" EPs through Iron Pegasus Records. The current CD, "The Trilogy Singles", gathers all of the three EPs (and ends with a new extra track). Knowing the roster of Iron Pegasus, their quality, the style of bands they sign, and Okkulto’s past in DESASTER, I had a pretty good idea of what to expect. And indeed, this is old school Black / Thrash, or even plain Black Metal in the way VENOM created it (‘Banshee Calling’, for example, much reminds me of the ‘At War with Satan’ era), as even though the DESASTER reference is inevitable, EURYNOMOS tends to be slower (despite killer faster tracks like ‘Fierce Alliance’) and Okkulto’s gritty voice is akin to Cronos’ (I was often also reminded of DECEASED’s King Fowley). It all begins in good old fashion with an ominous wind and bells in the distance. After some electric guitar parts we can also hear a tombstone being dragged and the rattling of chains. This is of course the ‘Opening Of The Vault’ of the first EP, "Unchained From The Crypt". Aptly named it is, for these guys do indeed bring back from the crypt the sound of the oldest and most macabre Black Metal, with songs about witches, evil spirits, demons, old roman rites, cosmic rays… a feast for my old metallic ears.The sound of the band is raw but we have real songs to hear. Aggressive and ugly, but musical. With very little technical flourishes, but effective and to the point. Listen, for example, to the amazing ‘Eye Of The Pantheon’. I find it remarkable when a band succeeds, to my ears, in showing me the old flame still burns and it is still possible to draw from the original inspiration of long-gone days. I love the details of acoustic eerie intros and old movie sound clips opening the way to such well-crafted tunes of olden glory. Enthusiastic I quote Okkulto’s defiant singing itself: "Your name shall sound like a weapon / Transferred into metallic force / So come to life and live through us / You, the hades beast – Eurynomos". An amazing release and a must for all lovers of old Black Metal. Get this from www.eurynomos.com, www.facebook.com/eurynomosofficial, www.iron-pegasus.com