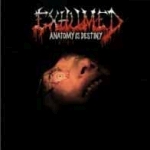 Damn I’m surprised, because I’d never expected US Gore / Death / Grinders EXHUMED to release such a mature, elaborated and well-produced album… but do not think that they have become commercial wimps now, fuck no… EXHUMED are still the same: brutal, bloodthirsty, dirty, aggressive and fast, but production and sound have changed and it is disputable if it were for the worse or the better. For my terms I do not have a problem with EXHUMED reminding me more of CARCASS last masterpiece "Heartwork" now and that they added some great melodic solos to their sound instead of delivering another raw mixture of early CARCASS and REPULSION. Now for the first time one gets the chance to discover that the guitar duo Harvey / Beams is capable of creating some killing Metal riffs (e.g. at the end of ‘Under The Knife’ or in the middle-part of ‘In The Name Of Gore’) as well as some beautiful leads like in ‘A Song For The Dead’. The fact that Neil Kernon (CANNIBAL CORPSE / NEVERMORE) is responsible for the cleaner sound of "Anatomy Is Destiny" might offend die-hards, but I can assure you that although I needed a while to get warm with "the polished EXHUMED" too, it was worth the effort in the end. "Anatomy Is Destiny" is musically more diversified than its predecessors, offers heavy mid-tempo breakdowns, the same grinding speed parts as usual, a couple of the band’s finest songs ever and shows that a good sound does not ruin a good band! Highly recommended CD. For more information visit www.relapse.com or EXHUMED’s website www.exhumed.us.