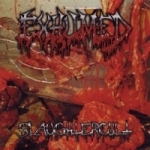 These sickos probably have released more stuff in their nine year existence than almost any other comparable band so far. Or do you know anyone else who can name no less than five demos, eight (split) 7″EP’s, two split CD’s, two compilation album appearances, one split live tape and two full length CD’s their own? I don’t! So, yes – EXHUMED are true underdogs, indeed! They originally started out as a five-piece in August 1991, but after some extensive touring and millions of line-up changes finally ended up as a three piece in September ’97. But unlike many other extreme outfits, EXHUMED haven’t become more polished or wimpy sounding throughout the years. Their new album “Slaughtercult” features a totally raw and intense mixture of gory Death Metal and Grind, which even got produced fairly well! Musically their 13-track assault is somehow comparable to a way more extreme and aggressive version of CARCASS during their “Heartwork” period mixed with the sick grunted elements of their “Reek Of Putrefaction” / “Symphonies Of Sickness” era. Totally devastating from start to finish! And as “Slaughtercult” visually furthermore comes up with a bloody bandlogo and one of the most gory cover artworks in quite a while, genre lovers shouldn’t hesitate for a second in getting themselves a copy of this well done offering.