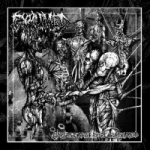 Some new EXHUMED stuff, yehaaawww!!! Though this is just a cover-album, the violent intensity and raw Gore Fucking Metal feeling is present in almost all of the re-interpreted tunes. “Not verily produced” by the new EXHUMED line-up, with the album-title and by utterly massacring the METALLICA classic ‘Trapped Under Ice’ (my favourite!) the US old school Death / Grinders even dare to use some nice allusions to the cover-excursions of the San Francisco-based “band-formerly-sounding-like-a-Metal-band”. By implementing ferocious blast beats in the aforementioned song, my favourite track of the indestructible MASTER ‘Pay To Die’ or SAMHAIN’s ‘All Murder, All Guts, All Fun’ (a very well fitting motto also of EXHUMED) it is more than obvious that EXHUMED try their best to not just re-enact, but re-invent these songs. And, except in the case of LED ZEPPELIN’s ‘No Quarter’ they succeed 110%!!! Be it the moody opening instrumental originally by THE CURE (!!!), which reminds me a bit of the mellow opening of METALLICA’s ‘Battery’, the Punk / Grind – tunes by UNSEEN TERROR, SIEGE, G.B.H., the massive version of AMEBIX ‘The Power Remains’ and my second highlight ‘The Ghoul’, originally by Doom / Rockers PENTAGRAM, which is totally fucking morbid in the EXHUMED regurgitation. In addition to that you’ll get some thrashing stuff like SADUS ‘Twisted Face’ (Matt Harvey’s vocals fit here extremely well) or EPIDEMIC’s ‘In Fear We Kill’ off the band’s ’89 demo. EXHUMED’s skilled musicianship manifests in the excellent leads embedded in the covered songs, which are often pretty free interpretations of the original leads and just rip! To sum it up, EXHUMED’s new line-up now featuring Wes Caley of UP HILL BATTLE – fame and ex – IMPALED member Leon Del Muerte delivers a more than good first release, that’s extremely entertaining, dedicated and excellently sounding. Sure, it’s just a cover album, but a band as long around in the scene as EXHUMED may do this and if the result is as cool as “Garbage-Daze-Regurgitated” then they may also do another one! Great release, a little sparse in its layout yet with a cool cover art by the guy who did the older NAPALM DEATH artworks. Don’t miss this! www.listenable.net, www.exhumed.us, http://parasitictwin.net.