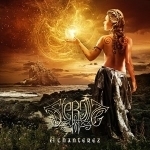 This is the third album from this Russian Folk Metal band. In fact this is really Folk / Rock music with some Heavy Metal influences. Well produced and recorded, this is to me more like a Flute Metal band than anything else. The vocals are handled in a small part with a female vocalist and in a bigger part with a male growler which gives the heavier edge to the music. Folk and Metal have clashed way many times, and there are some big names out there, but to me this all sounds like the same. It is ok if you are a Middle Earth fan, but then it all becomes old… which might seem like the goal, but to me it becomes boring. Certainly I have an appreciation for some bands that have a slight touch of Folk in their Metal, whatever kind of Folk it might be. Used with creativity it can add to the music, otherwise it will make it sound like a joke. You see FFERYLLT does not exactly sound bad, but it sounds like something already done. And I must admit I am not a big follower of Folk influenced Metal bands. The few I have heard, I can relate them to this band. The death vocals sound also out of place here, I think it will sound better with normal vocals. And the female vocals, well, they just add nothing here. If you’re a Folk / Pagan band you better follow the really great bands that are able to do it right like the great OBTEST. Otherwise, this sounds like a Doom / Death / Gothic band playing with too many flutes and violins. Fans of the more extreme ways of Metal, approach with caution. Fans of anything Epic / Power / Folk in Metal, will surely enjoy. www.facebook.com/pages/fferyllt-sympho-folk-metal/278082853870, www.stygiancrypt.com