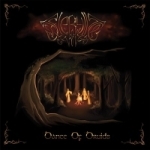 The Pagan movement has definitely hit Mother Russia and a lot of the new bands seem strongly influenced by their export number one band ARKONA. This statement is clearly supported by the latest Stygian Crypt release "Dance Of Druids" by newcomer FFERYLLT. So the direction is quite obvious – emotional Pagan Metal supported by a female singer, this time with a more classical approach but nevertheless a mixture which deserves the terminus Pagan Metal. The band started their true musical journey in 2007 (originally founded in 2003) – after the joining of several additional musicians – and after two busy years their debut "Dance Of Druids" finally sees the light of day. But next to their national heritage the Finnish scene leader ENSIFERUM has set a dark mark on this Russian band. During the playing time of nearly an hour the musical parallels are becoming more and more obvious – a fact which is further supported by the additional cover song ‘Lai, Lai ,Lai’ (from the ENSIFERUM album "Iron", released in 2004). This dedication is maybe a tribute to their roots and an easy way for every fan to identify the direction of FFERYLLT but for me a little bit too much mainly due to the fact that every band has to fight their own "battle". In the future the Russian band should try to concentrate more on their own musical abilities which are definitely there, this time a shallow taste remains, more of a copy kill than true Pagan dedication. www.fferyllt.net/default_eng.htm, www.stygiancrypt.com