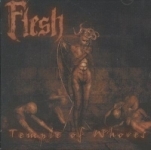 Somehow it took me a while to get into the second album of FLESH, the solo project of Pete Flesh who used to be in MAZE OF TORMENT and is still active in DECEIVER. I haven’t heard this album’s predecessor so the focus lies exclusively on “Temple Of Whores” which pays homage to Death Metal of the early 90s. The album has an undeniable “Swedish vibe” written on it but influences seem to come from both the American (rather old SLAYER, AUTOPSY / REPULSION than MORBID ANGEL, though) as well as the Scandinavian school. These nine songs have been recorded in Abyss Studio over the course of one week and the result is mostly very convincing: the guitar tone (which is not overly tuned down) is sufficiently clear and distorted at the same time and the vocals are just great midranged, hateful commands as one pictures them for a Death Metal record in this style. What I consider as not too great is the drum sound, especially the cymbals which sound just way too thin and artificial for my taste. While we are at it: actually the whole drumming is what keeps the songs down here. The performance is solid but very unimaginative and unvaried – the pattern and tempo is hardly changed during the album. It is a bit of a pity but many of the otherwise great riffs and simple but effective leads can’t unfold properly as there is no dynamics and communication between them and the percussive part. I hope this problem will be taken care of on the next effort of Mr. Flesh! What a killer song the album closer ‘Invisible Darkness’ could have been! This way it is “just” strong. Maybe this is one of the typical shortcomings of project / two-man bands, maybe I am too critical here… you can make up your own mind via: www.myspace.com/peteflesh

FLESH - Worship The Soul Of Disgust - by Manolis A.
FLESH - Dödsangest - by Stefan Franke