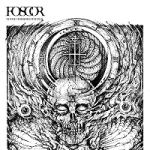 Catalonian horde FOSCOR are no newcomers to the scene and have released their fourth output "Those Horrors Wither" already in late November 2014, but the good thing in Metal is, that music never grows old. To be honest, I totally missed out the band’s outputs apart from their contributions to the KATATONIA tribute album, which I liked a lot, so I had to get myself some tasters of their past, before I entered into their fourth output. Their development into a style, called progressive Black Metal already started some years ago with their last album. Somewhere between KATATONIA, FORGOTTEN TOMB and newer ENSLAVED the band can be found nowadays. Definitely this album breaks with their Black Metal past, but the band still seems to look for their direction. Influences of 70s Prog Rock and 70s Doom can be found, as well as a lot of Dark Metal, similar to what FORGOTTEN TOMB or KATATONIA deliver nowadays. Also the vocal style changed, as most of the vocals by vocalist Fiar are now presented in form of clean singing. Just some grunts where it fits to the music appear from time to time. There is no need to have grunts or caws on every album, as I started to enjoy clean vocals as well, but I still have difficulties to open myself for this album, as really strong songs or song fragments with hellish good Dark Metal tunes enter my ears and touch me, before the Prog Rock parts and clean singing intrerrupt the melody and song flow. Good example for this is the fourth song of the album ‘L.Amor.T.’ The main song construction is brilliant, but always gets interrupted by the 70s influenced parts. From the technical side, there is nothing to complain as these guys seem to be good musicians, but this album seems to be a crossroad for the future of the band. The decision between Dark Metal and Prog Rock has to be made, which is of course diffult for a band and their future. But both influences only really fit together in some rare parts on the album. Productionwise the album is fine, as recorded in Barcelona and mixed in London, the material so or so received the deserved treatment. The artwork is fine and for collectors, the first batch of the CD has been released in digipak format. If the given info made you curious anyway, you can check the band out at following locations: www.facebook.com/foscor.official, www.the-stone-circle.com