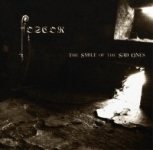 FOSCOR
The Smile Of The Sad Ones
(Temple Of Darkness Records)
51:47min

After the happiness of reading the mail of Fiar, singer of the band, telling me they had already sent me the promo of what would become their second full-length (the first one impressed me quite a lot and put them on my top list of Spanish Black Metal bands), I knew I wouldn’t be able to be too much objective with “The Smile Of The Sad Ones”, which is the beginning of the cooperation between the band and the young label from Barcelona, which appeared quite strongly because of its excellent releases. But I must say this isn’t the kind of album you put into your player and like it right from the first time (as it happened to me with “Entering The Shadow’s Village”, although it needed some listens too to appreciate it in its whole). Their sound has evolved, although not changed, and you can feel this since the first listen. That low progressive tone which appeared on its predecessor, and reminded me of VED BUENS ENDE, has been transformed in an important characteristic of this recording, and it puts them on the same wave as those Norwegians masters, as well as the first ARCTURUS, or their perfect successors, the Norwegian / English CODE. And I bet these last ones have been a big influence on this four-piece at the time of creating Black Metal. They can’t deny the ferocity and rawness and mix it with melody, technique, variety and the beauty of constant variation (which puts them next in line to EMPEROR’s dynasty too). I admire how they don’t follow any simple and accessible formula nowadays and they rack one’s brains to create something which results unique and beautiful, as well as extreme and hateful (which you can achieve with simple formulas too), because here darkness, speed and twisted ideas keep dominating, or, which is the same, Black Metal. And that Black Metal has to be understood with capital letters, because, apart from all the progressive and variating stuff, and still using clear vocals on some passages, and searching beyond, I can still say they have carved deeper into blackness and gone from commercialism. With every new listen you can find new details, and still like that you need a lot of them to appreciate the whole and don’t get lost on the way, and I say it because I wasn’t too sure of my opinion in the beginning, although liking it clearly. Entering the details, apart from the clear vocals, which appear on some of the tracks, and give them a more agonical touch, the voice of Fiar is rabid and raw, and sometimes nearer to cold cries than to clear and defined choruses, rising up the atmosphere. The guitars, as you can imagine with all that I’ve said before, are the most varied part of the album, from the usual fast and cold melodies to the dissonant arpeggios, as well as a bass which gives enough substance. And, to round it up, they chose again a not too clear production, with guitars sounding as real sound walls, with shapes of those and melodies on them, and all this added to the vocals, the bass and the drums which, although enough listenable (especially this last one) is just where it has to be on the mix not to break the atmosphere. And the same happens with the vocals, which is more part of the whole, not standing out. I will end as I just started; I can’t be objective, I have a weakness for this band, and still with it, I think I’m right speaking about its quality, don’t waste your opportunity in listening to this masterpiece, as well as seeing them live; I’m already anxious of seeing them again on stage. www.templeofdarknessrecords.com