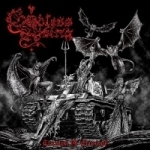 GODLESS RISING already established themselves in the Death Metal underground with two killer albums “Rising Hatred” and “Battle Lords”, but “Trumpet Of Triumph” is somewhat of a change in that, as it features a new guitar and bass player Toby Knapp (ex – WAXEN, ONWARD) who replaced long time axe shredder Paul Flynn. Also, for those unfamiliar, hellish vocals are handled by none other than Jeff Gruslin, legendary vocalist from two first (and best, imo) VITAL REMAINS albums “Let Us Pray” and “Into Cold Darkness, so I’m just gonna state it right here that if you like them, you can stop reading this review and get all GODLESS RISING albums right away! Basically, the band merges old school Death Metal with Black and Thrash riffage weaving in those uncanny demonic melodies which bring MERCYFUL FATE to mind. Given a fuckin’ powerful and raw yet perfectly clear production “Trumpet Of Triumph” crushes all the posers and pretenders to the hell throne of blackened Death Metal! Lots of tempo changes, wicked melodies and those raspy, venomous vocals of Jeff Gruslin create dark, suphuric atmosphere of the demonic underworld!! The album is not a one dimensional blast though, it’s got many different layers which unfold and surprise after each new spin, proving killer compositional skills of Toby Knapp. From what I could find on the net, drummer duties are handled by Andy Jones (ex – PHLEGM), so this is one gem that every old school Death and Black Metal maniac should own! Hail! www.myspace.com/godlessrising, www.moribundcult.com