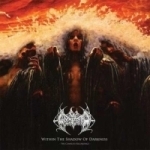 GOREMENT
Within The Shadow Of Darkness - The Complete Recordings
(Century Media Records)
108:56min

Under the monicker ‘Death Certificate’, Century Media is currently having a campaign where new Death Metal albums are put in the spotlight and old but somehow forgotten classics get a second chance. One of the first old bands they dag up is the Swedish band GOREMENT. Their debut album “The Ending Quest” (originally released in 1994) is part of my own collection already for many years and is definitely a true gem that unfortunately never got the chance it deserved. This was probably mainly caused – as Frank already mentioned in his review of their other compilation “Darkness Of The Dead 90-96” – due to the tiny label that released the album originally – Crypta Records – and the Black Metal trend which was booming rather heavily by the time this album saw the light. Anyway, simply put: whoever is still desperately looking for the ultimate successor to the godly AMORPHIS debut "The Karelian Isthmus" just HAS to buy this re-issue as the riffs, melodies, production, structure of the songs and – especially – the vocals remind you constantly of that wonderful and amazing album. The guitars are clearly very low pitched which makes GOREMENT sound very heavy and at times rather doomy also. There are several highlights like the fantastic and largely instrumental ‘Silent Hymn (For The Dead)’, the incredibly sad ‘Sea Of Silence’, ‘Vale Of Tears’ and ‘Darkness Of The Dead’ (both with great drumming). This re-issue does not only include this great album but comes up with a second disc with literally rather phenomenal material as well: the extremely brutal demo “Human Relic” from 1991 (it’s very rare these days to hear such a heavy and at the same time great guitar sound), the demo “Obsequies…" from 1991 (again produced by the one and only Dan Swanö), the EP “Into Shadows” from 1992, a promo from 1995 (the only not really convincing material, due to more ordinary and not entirely convincing vocals) and some previously unreleased and live recorded covers of CARCASS and PUNGENT STENCH. In case you’re a fan of Death Metal, if ‘old school’ is not a dirty word for you, if you have a limited budget and you can buy only one album this month, let it be this one. You won’t regret it. For more information check out www.facebook.com/pages/gorement/137355626316306, www.myspace.com/gorement, www.centurymedia.com