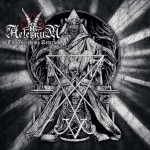 It was a long period of silence since the last IN AETERNUM release, the EP ”Curse Of Devastation” from 2007 (the BEHEMOTH period demo compliation from 2014 not counted, due to irrelevance here)… and that was a pretty cool release. Therefore curiosity what these guys were up to almost a decade later was sincere. Four tracks fill this EP, of which one is a cover and one a re-recorded old track from their debut ”Forever Blasphemy”. These two are ’Wolfpack’ and ’Stench Of Victory’. The way ’Wolfpack’ bursts in with a brutal killer riff comes close to INCANTATION. After this it jumps back and forth in a way reminding me strongly of IMPIETY with the sharpness in the riffs and sudden outbursts in a kind of epic Thrash whim. These leaps give this track the power of a bomb, but it kind of prevents the track from having head and tail. ’Stench Of Victory’ is equally forceful but more melodic. Still the problem remains, being too frantic for its own good. The production is raw and heavy and the vocals are mixed a bit in the background but they’re raw and sounded like a mix of WATAIN and NECROPHOBIC. On ‘Curse Of Devastation’, the production seemed more in balance, especially in the drums. In ’Majesty Of Fire’ the DISSECTION influence was still around and this version is quite cool with some great leads. Because of its sound GOD DETHRONED came to mind at the time of ”The Grand Grimoire”. On the other hand, there wasn’t anything wrong with the original version. Same goes more or less for the cover ’I Am Elite’ of WAR; nice but not better than the first one. ”The Blasphemy Returns” announces a considerable comeback indeed. To what degree these two vulcanic eruptions offer fertile ground remains to be seen. For now, if you’re into the bands mentioned, you better check this out. For more info go to www.inaeternum.com, www.facebook.com/inaeternumofficial, www.pulverised.net