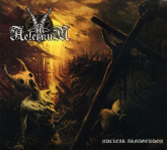 It’s no secret that things happen between recordings and the release of an album. Also it’s nothing new that albums often don’t turn out the way they were planned to sound or look like. Remember a pink MARDUK logo or DARK FUNERAL’s first full-length, which had to be re-recorded back then. IN AETERNUM had all of these issues in their career. A good example is their third full-length “Nuclear Armageddon”. A very good album which suffered from diverse struggles with members and labels. Necropolis Records just started to get into financial troubles and had not managed to send them funds for the recordings. Blackmoon took over and wanted them on Hellspawn Records, but finally didn’t like the sound of the Abyss recording and stepped out as well. The album was granted another recording session and finally got released by Agonia Records. I always liked the material but not the product Agonia finally delivered. Chris of Cryptorium Records shared this opinion and managed to get the album released in the form it was always planned to be released. After a short intro, ‘Genocide’ gets unleashed and it is still one of the best tracks, the band ever recorded. Everything fits. Tight songwriting, good instrumentation and a good mix of Death, Black and Thrash Metal with a little doze of HM2 Death Metal. Here they deliver all I ever loved in MERCILESS and show that they are still underrated as fuck. ‘Whirlwind Of Fire’ has a pretty black painting with damn good melody lines and tight drumming, but also the vocals of mastermind David Larsson are really nailing it. The sound is clear bit not overdone and perfectly fit into the picture. Same goes for ‘The Final Doom’ before the first stringed interlude ‘Ashes Of The Earth’ calms the Armageddon down a little bit. ‘Dawn Of Annihilation’ is another killer track. Their cover of SARACOFARGO’s ‘Satanic Lust’ is ok but should have been added to the end of the normal album. It gets followed by ‘Beast Of The Pentagram’ which has been released as 7″ only back then after the album release. It sounds a bit different to the album recordings but fits in perfectly to the remaining material. ‘Sin’ returns to the former album format again and the album gets closed with the title track ‘Nuclear Armageddon’ which also has this memorable lead melody. After two silent tracks this re-release also offers ‘Tormentor’ as third bonus track, also taken from the “Beast Of The Pentagram’ EP. Not enough of that the second bonus CD offers two live gigs from the “2 Heavy 4 You Festival” (Falkenberg, Sweden, May 25-26, 2001) and “Open Hell Festival” (Volyně, Czech Republic, July 26-27, 2002). Especially the first recording is very raw but shows the immense quality of the band. Rounded off by a new cover artwork, not far away from the original but definitely better, this re-release is value for money and fans of the band need to add this fine gem to their collection as it is limited to 500 copies only. For more info check one of the following sources: www.cryptorium.se or www.facebook.com/inaeternumofficial. 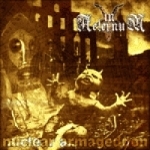 Hearken infidel thralls! This is a novelty to the Voices reviews. Due to the fact that Stefan and I liked this incantation chanted by IN AETERNUM both so very much, we decided to join our unholy forces and vomit forth this review as brothers in conviction. Here we go. First of all it’s Stefan’s turn: After several struggles with their former label Necropolis Records, Sweden’s finest Black / Death commando is finally able to unleash its third infernal full-length strike. I was not that happy with "Revelations Of Hell", "Nuclear’s" predecessor, because its songwriting was relatively weak compared to the great debut and focused entirely on brutality and speed, but failed to leave behind any remarkable moments. Now "Nuclear Armageddon" descends upon mankind and well, it leaves everything reduced to smouldering ashes! IN AETERNUM at last manage to connect their Death, Black and Thrash Metal influences with convincing song structures and offer eight 100% killing songs, a melancholic acoustic guitar instrumental and of course the mandatory intro. With "Nuclear Armageddon" the Scandinavian three-piece has finally found its individual sound that does not any longer resemble DISSECTION (if it ever did), but turns out to be deadlier, thrashier and less melodic than the average Swedish Black / Death. My personal highlights are the opener ‘Genocide’ (cool thrashing riff), ‘Sin’, the closing hymn ‘Nuclear Armageddon’ and IN AETERNUM’s musical tribute to DESTRÖYER 666 ‘Dawn Of Annihilation’, get this fucking CD and to put it in David Larsson’s own words: "Prepare to meet your final doom". Well, now its up to you Cthulhu, would you agree with my view on this release? Or are you an IN FLAMES-pussy? Hahahaha. Well then, Stefan, I reckon I should ignore your last remark and proceed to discuss the present record, hahaha. Here we go. I am gonna pound this tacky release into the ground then. This band is utter crap, it doesn’t produce anything but shit and, contents-wise: mental diarrhoea. Hahahaha, just kidding. I must say that IN AETERNUM definitely surprised and convinced me with a solid record that kicks ass. I just love this raw, brutal and dark atmosphere. The material sounds authentic and probably was vomited forth out of a deep demented conviction. The latter you can sense in every detail, be it sound (raw and brutal like hell), the compositions (soooo non-compromising – it’s a pleasure!), the lyrics (well, I don’t have them in front of me right now, but I reckon they’re all pretty blasphemic, apocalyptic… you name it!). So, to cut a long story short, which isn’t a particular strength of mine, I appreciate such music because it’s honest and such honesty can be felt. Composition-wise, ‘Crucified The Son Of A Whore’ is my favourite song. It’s got all the killer elements of IN AETERNUM combined. That is, a lot of blasting passages, some mid-paced might, old-schoolish Thrash riffs, frantic vocals – superb. Good one! Got curious? Well, you morons, then don’t hesitate to contact these lunies via email: in.aeternum@telia.com, the band’s website: www.inaeternum.net or the label’s website: www.agoniarecords.dm.net.pl