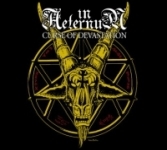 I have to admit; even as IN AETERNUM exists already since 1992 I have never heard any of their releases so far. Well, to correct me, it’s BEHEMOTH which started in 1992, but as this ominous Polish band with the same name existed before them they changed their name to IN AETERNUM. I’m not that sure about all the names playing in this band, but Perra Karlsson is the drummer in NOMINON, too, which makes me think that IN AETERNUM is no fulltime project, though I’m really not sure here and I didn’t get any further information. Honestly spoken this doesn’t really matter to me as long as the music is worth to support. So what do we get here? It’s more or less the usual dose of Swedish melodic Black Metal in the vein of DISSECTION, NAGLFAR, UNANIMATED and the likes. Musically perfect played, with an amazingly great sound (recorded in famous Abyss Studios by Tommy Tägtgren and mastered by Dan Swanö at Unisound) and filled with great harmonies which highly impress me all the time I listen to this seven inch. I’m not sure where they took these 4 songs of this EP from, because I suppose that there was more recorded and these songs are nothing less than an appetizer for their next longplayer. The strange thing is that the recording is dated back to December 1st to 3rd 2006, so I wonder what happened. Perhaps the guys just would like to finally release the songs as the planned way to release these songs was not possible. And once more I have no clue why this recording is exclusively licensed to Pulverised Records when it is released through Blood Harvest Records? Ha, come on, don’t ask me as I don’t care. It’s the music that counts, not that business shit and the music on this tiny black vinyl is great and therefore you shouldn’t think any longer and order it in the usual way. Check out www.bloodharvest.se or www.inaeternum.com.